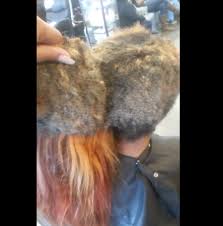 Why Women And Girls Should Think Twice About Keeping Substitute Hair Attached To Their Scalp For Extended Period Time, And The Needs For Mobil Hair Salon’s Serving Black & Brown Under Privilege Communities.

Unknown to many, wearing wigs has been a part of the world’s different cultures since time immemorial. In ancient Egypt, both males and females wore wigs made either from human hair, sheep’s wool or vegetable fibers, depending upon their social status. There were a number of benefits for Egyptians from shaving their heads. First it was more comfortable in the hot Egyptian climate not to have hair. Secondly, a bald head helped avoid the danger of an infestation of lice, which was a problem at that time.

However, it appears that Egyptians preferred having “hair” which resulted in the creation of wigs that gave the appearance of hair. The new wigs also protected the Egyptians’ bald heads from the brutal sun. Wigs became part of daily wear for the Egyptian people indicating a person’s status as well as their role in a society or politics. Woman’s wigs were adorned with braids and gold, hair-rings and ivory ornaments making them more stylish than men’s wigs.

Ultimately, the more elaborate and involved the wig was, the higher the social rank. One of the earliest documented users of wigs was the Egyptians. Since ancient Egypt is so hot and humid, most people, especially their royalty, shaved their heads and donned massive wigs to keep their shiny heads cool. These Egyptian headdresses and wigs are now iconic and representative of the rich culture of Southern Ethiopia and Northern ancient Egypt.

Egyptians were not the only people sporting wigs, but we can also look to the Roman empire and other ancient cultures like the Phoenicians of ancient Greece, the Assyrians of the Mesopotamian, and even ancient Jews of Israel have wigs engrained into their heritage. Wearing a wig could represent your status in high society or show how much power and influence one has over the others. The term “crowning glory” was coined by these ancient people who looked to wigs as part of their daily lives.

Today, in modern times, people wear wigs to look beautiful, boost their self-esteem, and even go as far as signifying their new persona’s. Today’s famous wig wearers include Cher, Lady Gaga, The Kardashians, as well as many male actors in Hollywood, etc.

Of course, seeing these celebrities wearing beautiful hair wigs and extensions have inspires many ordinary people who also have the desire to have the same kind of beautiful hair but without the finances to maintain the upkeep that leads to keeping their wigs on for far too long, longer than what is recommended leading various health issues.

Hollywood has many ladies feeling the need to look like celebrities when even the celebrities themselves don’t look like their dolled-up selves all the time, as to why you see many wearing shorter hair daily which was easier to up keep. Keep in mind wigs and extensions should be use the same as caps and hats, changing them to keep new persona, the same thought should be used when wearing wigs and extensions, the pandemic for women of color took away that options (lack of funds).

Wearing wigs and getting weaves isn’t cheap by any means. So before you go and empty your pockets on a new weave or hair extension, here are some side effects to wearing a wig every day or wearing it for far longer than the recommended 12 hour period every. The epidemic economic impact force many women to use a variety of methods to extend the time frame for keeping wigs and hair extensions attached to their scalp. 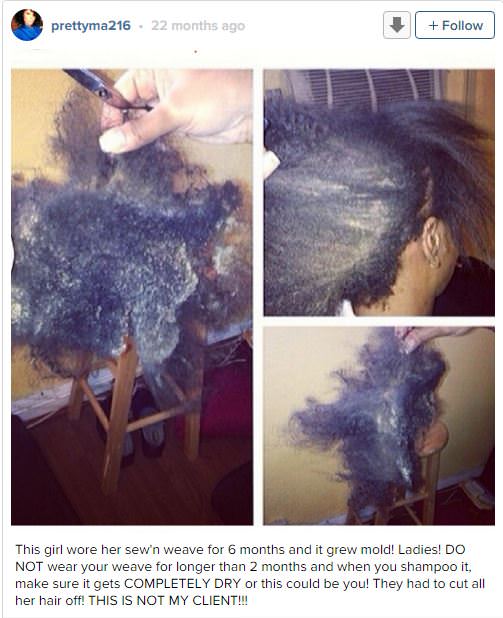 Recently in the news; the story where a young lady use Gorilla glue spray to hold her hair in place and ended up having to have a Plastic Surgeon to removed the glue to save her hair follicles, all because she did not have the funds to purchase another wig after being laid off due to the pandemic restrictions, which effected young women of color, especially African American, who are struggling to maintain the look that makes them happy and helps with their self-esteem with limited funds.

Another True story 12/30/2020; a young female sports fitness athlete that require her a professional attractive appearance, and restrictions on gyms severely limited her income for over a year, even though she wanted too remove as her wig weave started shedding badly. With no funds to buy a replacement are set up and a stylist to have it removed she did what she had too. Most African American especially women during the pandemic very little money was available to her for anything except food and lodging.

With her health declining due to issues with keeping the weave in, she sought the help of a friend to try and remove it on her own, where she ran into serious problems as the wig was attached using two methods, sewing and weave glue to keep it in place. After removing the wig, she found that she had to overcome other challenges; the new hair growth had become tightly matted (dreads) around the sewn and glued parts, and because it had not been shampooed are condition smiler to steel wool.

It was her hope that she could salvage the new length of her hair and start out fresh with a new natural look; sadly that did not occur. Over the next 3 days struggling with the aftermath of removing the wig she ask a neighbor to assist/ help her try and untangle the damaged hair using concentrated conditioners the neighbor finally suggested a beautician. The matted hair had to be cut out, which affected her emotionally, something she still has issues with.

We decided to release this article to shed light on a major problem that the epidemic restrictions that has not been given any attention. Hair Salons and Beauty Shops, had to close leaving 90% of their regular customers with little are no options for the regular maintenance of their; which adversely affected those in minority community more than any other community.

A quote from a well known black celebrity that these type of incidents were “ghetto” shows how out of touch some of us are to the reality of what is happening.

“What is needed now and in the future is Mobil Beauty Salons (3 to 5 stations), that can go into these neighbor hood during the restrictions and after they are lifted, and become a regular services providers for these communities Etc; we do request that if you decide to implement this idea that you provide service donations to as many girls and young women that do not have funds to boost their self-esteem and prevent the emotional distress they have been going through; and can provide training hubs and employment opportunities long after the pandemic has passed;Just An Idea that needs attention.” WRUSA Editorial Staff

Extended Wear Health Issues: This Video Shows The Serious Results That Could Happen

While wigs are sometimes uncomfortable to wear, and can sometimes move are fall off when you don’t want them to, wearing a wig within the recommended time allowable can make you get used to it and give an incredible boost of confidence, more than enough for you to do well in that job interview you’re after.

While weaves are hard to take care of and needs a lot of maintenance, a little washing and brushing does wonders. And while wigs are expensive to get good quality ones, if you take care of your wigs, it is value for your money as it’ll last longer than you’d even need it for, even when sewn in to your hair or attached with weave glue to your scalp.