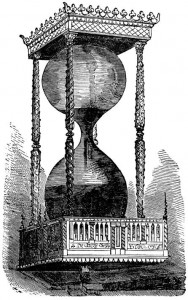 Time and People: How and When We Started Keeping Time
Time has always been a mystifying concept, which occupied the minds of best thinkers and philosophers since antiquity. Mark Aurelius envisioned time as “a river made up of the events which happen, and a violent stream; for as soon as a thing has been seen, it is carried away, and another comes in its place, and this will be carried away.” Although men are not the only beings defined by the passage of time, the humans are the only ones who – given their intellect, memory, and imagination – are able to envision the past, present, and sometimes the future. Aristotle asserted that “time, past, present, and future, forms a continuous whole.” Isaac Newton introduced the concepts of absolute, or mathematical, time which “from its own nature, flaws equably without relation to anything external” and relative time which is, “common time – some sensible and external (whether accurate or unequable) measure of duration by the means of motion, which is commonly used instead of true time, such as an hour, a day, a month, a year.”
When and why did people start keeping track of time? Ancient people, observing day/night, lunar, solar, and seasonal changes realized that they need to come up with some type of system to better predict those changes in order to be prepared for them. As such, while they did not recognize that the Earth’s revolution around the Sun caused the seasonal changes, they found it easier to observe the changing position and shape of the Moon and stars to keep track of time. First ancient calendars such as Babylonian, Mayan, Aztec, Early Roman and such were based on some combination of solar and lunar years and were subject to much confusion. Lunar months continued for about 29 days and, consequently, lunar years of twelve months were about 354 days and lunar years of thirteen months were about 383 days, which differed greatly from solar years of 365 days. Accordingly, ancient people tried to improvise their calendars to keep them in better alignment with seasonal changes. Thus, Babylonians alternated between twelve and thirteen months long years, ancient Mayans had eighteen months long years with each months having 20 days cycle plus five days at the end of the year, and early Romans had a ten months calendar and ignored 61 days each year.
By the time of Julius Caesar, the accumulated mistakes of the calendar were so great that winter came in September and fall started in July. As such, Caesar, with the help from the astronomer Sosigenes, introduced new calendar, which was calculated on the basis of solar year. The calendar, known as Julian, was widely used all over the world for more then 15 centuries and was eventually replaced by Gregorian calendar initiated by Pope Gregory the Thirteenth in 1582. The Gregorian calendar is still in use all over the world.
However, calendars were only one way of keeping time and people needed some way to keep the track of day as well. As such, first timekeeping devices were invented. Thus, ancient Egyptians introduced shadow clocks, or large obelisks, which helped to keep track of time by observing the shadow resultant from the movement of Sun. Also, at approximately the same time, or 2000 BC, ancient Mesopotamians invented water clocks, which were also used by ancient Chinese and Greeks. Other earlier devices included sundials, candle clocks, time sticks, and hourglasses. In 3rd century BC, Greeks came up with the first prototype of the watch, which used water-powered escapement mechanism, and in 10th century Chinese people used mercury-based escapement mechanisms. In 11th century, Arab engineers invented water-based watches, which used gears and weights to provide rotational movement. With time, people perfected watch mechanisms, which led to the introduction of mechanical, pendulum, and spring-powered clocks. In the 20th century, atomic clocks, the most precise watch mechanisms to date, were invented as well.