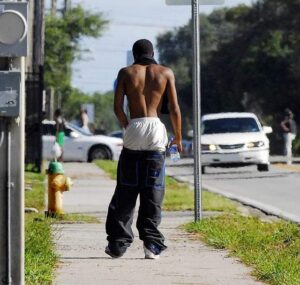 After Several Restaurant Chains Announce That They will be refusing to serve customers with saggin pants; I elected to repost this story just to keep the public aware of the true meaning behind the issue.

Letter from a college student directed to Black young men and women.

The other day, a friend of mine visited me in the lobby of my dorm just to chat while her laundry was drying. As we were chatting, two young freshmen came by. One of the boys wanted to ‘talk’ to my friend (as in date). She asked him how old they were, and both of the boys replied 18. My friend and I both laughed hysterically because we are both 22 years old. After my friend left, the young men were still hanging around and one wanted to know how he could gain her interest. 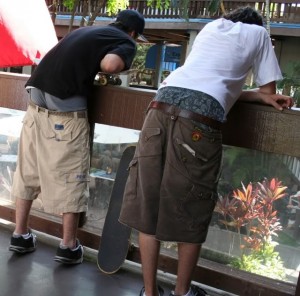 I told him the origin of that look was from centuries ago. It was the intent of slave owners to demoralize the field workers by forbidding them to wear a belt as they worked in the fields or at any other rigorous job. In addition, men in prison wore their pants low when they were ‘spoken for. The other reason their pants looked like that was they were not allowed to have belts because prisoners were likely to try to commit suicide. And, saggin’ pants prevents you from running.

We as young Black people have to be the ones to effect change. We are dying. The media has made a mockery of the Black American. Even our brothers and sisters from Africa don’t take us seriously. Something as simple as pulling up your pants and standing with your head held high could make the biggest difference in the world’s perception of us. It is time to do right by ourselves. We need to love and embrace each other. No one is going to do that for us.

It all comes down to perception. What people perceive is what reality to them is. We have to change not only the media’s perception of us, but we need to change our perception of ourselves.

Remember all eyes are on you Black Man. All eyes are on you Black Woman. All eyes are on your Black Child. People point the finger at us and expect us to engage in negative and illegal activities, to manifest loud, boisterous behavior, to spend our hard earned money in their stores, buying goods we don’t need, or really want. We have allowed not only the media, but the government and the world to portray us as a ‘sub-culture.’ They have stripped our culture down to the point where the image of Black people is perpetuated as rappers, athletes, drug users, and consumers of junk food, expensive tennis shoes, expensive cars, expensive TVs, cell phones and not investing in homes for our families.

We are so much more!

To all our Black Men: Its time to stand up. There are billions of Black Women who want to do nothing more than worship the ground that you walk on. We are so in love with your potential. We want to have your back, we want to love, support and cherish every ounce of you’re being. But with that you have to show that you are willing to be the head of our households. You have to prove yourselves worthy of our submission. We need you to be hard working…Not a hustler. We need you to seek higher education, to seek spirituality. We need you to stand! And trust us; we will have your back. We know that it gets hard. We know you get weary. Trust and believe that there is nothing that a Black Man and a Black Woman can’t handle with GOD on their side.

To all our Black Women: It is also time for you to stand up. It is time for you to stop using our bodies as our primary form of communication. It is time to be that virtuous woman that Proverbs spoke of. You cannot sit by the wayside while our men are dying by the masses. You are the epitome of Black Love. It starts within you. You need to speak with conviction to let not only our Black Men know, but the world, that you are the Mothers of this world. You are so powerful. You are so beautiful. You need to love and embrace every blessing God has given us physically, emotionally and spiritually.