In those days, the entertainment sources used to provide laughter, fun and enjoyment and were limited to social dance, theatre, sports, music, puppets and acts of pantomimes. It was a profession opted by only a handful of people with not much money or fame attached to it.

While, this new and revived form of entertainment industry has a lot of wealth and fame on offer. This is the main reason for more and more people taking it up as a profession. This large scale involvement of people in this industry with the upbringing of television and the other new sources of taking entertainment to the people differently, has made it more of a necessity. Earlier, people used to connect with it in their leisure time, but now, with all the cleverly designed acts of entertainment there is a rising desire in people to stay connected and come back to it more and more often.

People are getting addicted to entertainment industry as a whole and also to its various sources. The most popular and most addicting form of these sources include television series, cartoons, movies and video games. Entertainment sources are though not as addictive as liquor or drugs but still have a substantial effect on the individual and his capabilities. This overuse or overdose of entertainment is affecting the thinking and reasoning ability of people, making them lazy, aggressive and irritable at the same time.

People need to realise the urgency and need to move away from these sources of entertainment, that are acting as a hurdle in their goals. Especially, this large dependency on electronic sources must be reduced and alternative sources of entertainment, that involve active participation must be preferred. They are also helpful in improving your skills and abilities. Some of the active sources include playing a musical instrument, outdoor sports, dramatics or plays and dance. Entertainment makes a worthwhile industry, but complete dependence on anything must be avoided, and it holds true for all other sources as well. 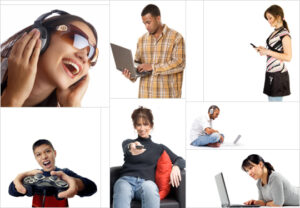 Entertainment industry also has its pros in the form of media, that acts as a bridge between us and the world. It updates us on various day to day activities around the world. With a number of informative programs it makes us well informed, technically sound and responsible citizens. But, these days its cons seem to have overpowered its pros for most of the people.

It is the responsibility of the individual to select what is good and what not, which must be avoided in all circumstances.